Today, the mome-raths path leaves Paris to lead me to the discovery of a unique Wonderland. With tired but happy eyes, I decided to write down the stories whispered along the paths of this artwork, the Garden of Giverny.

The author of this wonder between nature and the vision of an artist is Claude Monet (1840-1926), the famous painter, Icon of Impressionism who succeeded – not such an obvious endeavor – in finding success while still alive.

Monet lived in Giverny from 1883 to his death, that’s to say 43 long years. His garden, faithfully preserved by a restoration team, art historian, gardeners, architects, not only infuses the perception he was devised to, but also the more subtle feeling that he still lives there, vibrating in light, blooming and withering with his flowers.

When he bought it, around the pink house of Giverny, there was just a vegetable garden, some fruit trees and a boulevard flanked by cypresses and firs. Nobody could have ever imagined that that fragment of norman country, one day, would have become famous all around the world.

Monet immediately started to transform the place according to his taste, but mainly to satisfy his artistic necessities. When the firs in front of the house were cut down to make space for the gallery of climbing plants, the painters’s second wife, Alice, sighed: after endless discussions, she had had to renounce to her favorite trees, after all, the headstrong Claude was used to getting what he wanted – if not immediately – sooner or later.

Claude Monet created his garden one flower at a time, designing pictorial effects, perspectives, shadow and light zones, up to composing rectangular color coded flowerbeds, as if they were parts of a palette.

During rainy days it was quite usual to hear Monet’s fearful angry outbursts against bad weather, that blasted killjoy which prevented him from going out and paint in the garden. I don’t know what he hoped to achieve, maybe to encourage the shy Normandy sun to show up, to obey him?

The sensorial “impressions” of which Monet had an absolute need to create his masterworks were deeply tied to the rhythms of nature, and they followed the passing of the seasons, from bloomings to fogs, from the sun’s position, even the moments of the day. It was common to see him start to paint and then, after fifteen minutes, change canvas and start again: the light had changed, the landscape had absolutely nothing more to do with the one before.

“… In the end, change after change, I follow nature without ever catching it…”

The garden of Giverny was designed with careful expertise, always keeping in consideration the blooming periods and the behavior of light, two decisive factors in defining it appearance, that could be almost unrecognizable from season to season. Now, working as a gardener for Claude Monet, who seemed to claim that flowers had to bloom right when his artistic projects needed, could seem like an experience beyond any kind of human patience but, without such a blind stubbornness like his, we probably couldn’t appreciate such an equally enchanting result.

The painter had a difficult attitude – for many unbearable – but I wonder how much of that temper significantly contributed to his work. Would have we had Giverny, the water lilies or many of the artworks that made the movement of Impressionism, if Claude had been more diplomatic, accommodating or friendly?

Ten years after his coming to Giverny, Monet began his most ambitious project.

«of water, of water lilies, of plants, but on a very extended surface.».

To manifest what he had in mind, the painted needed first of all the perfect model to start from. The Giverny Garden, then, became bigger to add a pond, a dancing mirror who could continuously weave light, colors and mists, always suggesting new paintings, a vision defined in every detail, until the last branch, petal, shadow. A gardener had the specific task to eliminate, one by one, the fallen leaves.

Claude Monet’s passion for Japanese art is well known. The new pond became the occasion to surround himself with those shapes – mainly the particular ones of the bridges – that he had admired so much in the prints he had collected over the years (today they amount up to 250!) 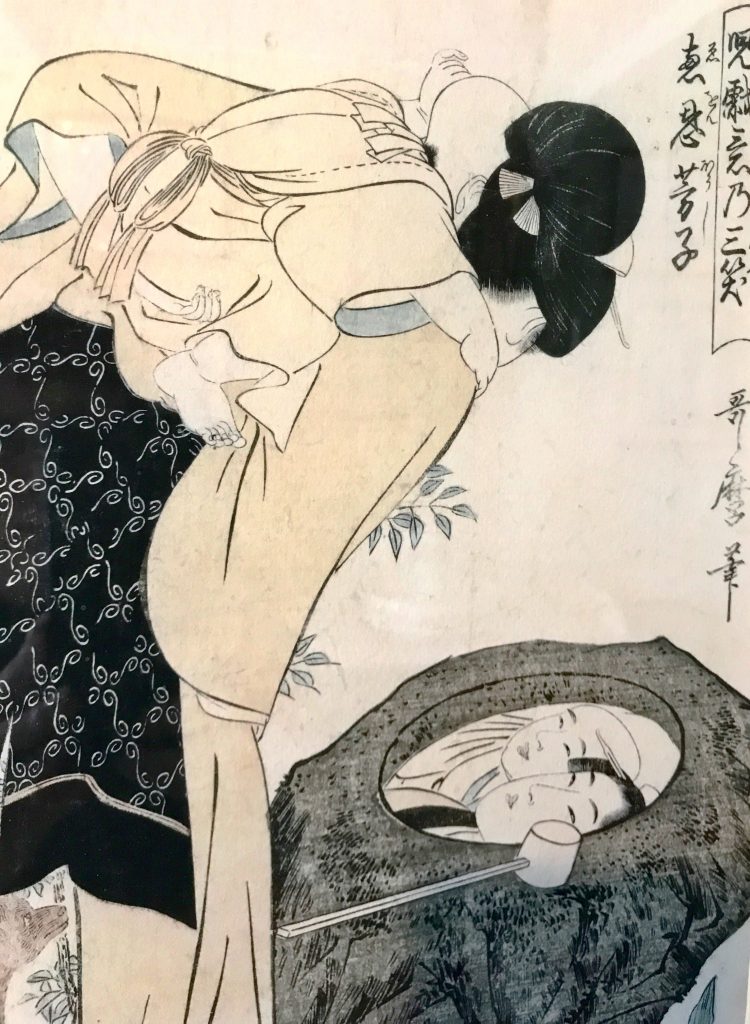 The pond alone couldn’t, however, make him create what he had in mind. Monet had clearly talked about «very extended surfaces» and so the first Atelier in Giverny wasn’t enough to hold his ambitious projects. 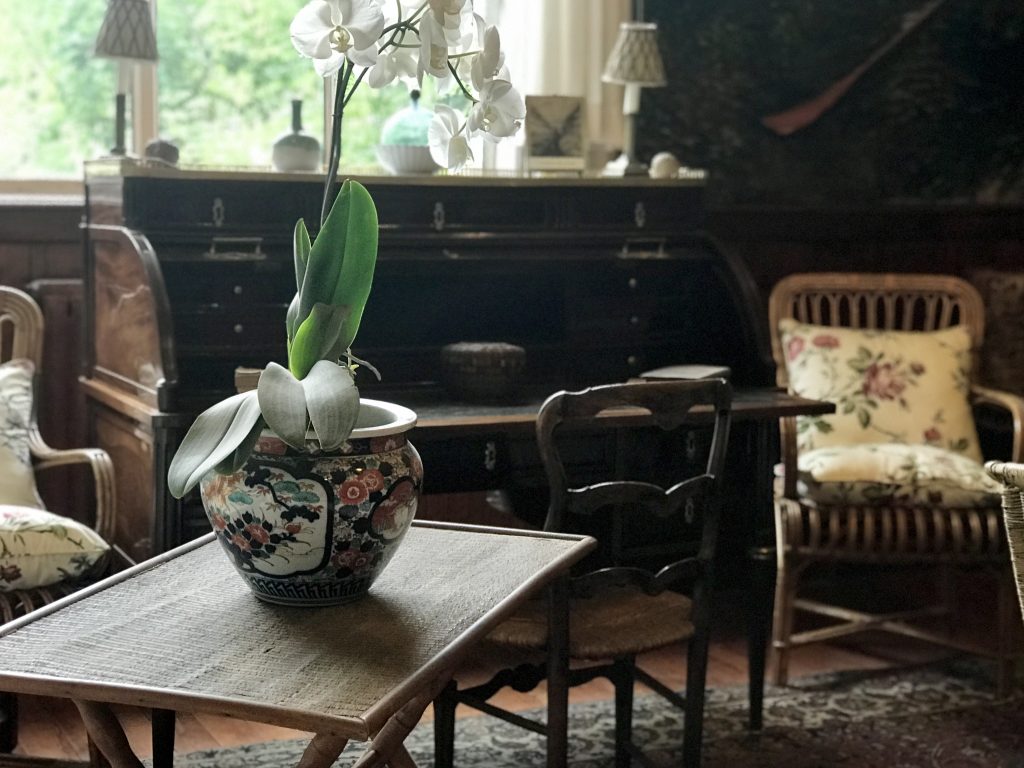 The Nymphéas project needed a specially designed space to contain the enormous canvases that would have amazed the world (today is where the shop is). Between those tall walls and in their almost 300 square feet, Claude Monet wanted to challenge Time, trapping the ephemeral masterpieces of water on canvas.

The obsession for the passing of Time, the changing of perceptions and the constant attempt to seizing the moment, was the cornerstone of all of Claude Monet’s work.

“The subject is secondary, what I want to reproduce is what’s between the subject and myself.”

Monet started working on the great canvases of the water lilies around the 90s of the XIX century, but the blows inflicted by destiny and the coming of the Great War put in serious jeopardy the completion of the project: in 1911 Alice had died, and three years later the artist had buried his second son, Jean.
Claude had almost lost his will to paint.

We owe his dear friend’s George Clemenceau (1841-1929) and his convincing pleas if today we can relish in Monet’s swan’s song.

“… the elements of nature… have something to tell us, but they wouldn’t without Monet.”

For the whole duration of the war, Monet painted tirelessly. To celebrate the victory, he decided to donate two panels of the Water Lilies to the State (November 1, 1918) and he told Clemenceau, then President, who rushed to Giverny to convince his friend to donate the entire cycle. The painter agreed, but the two famous oval rooms specially created to accommodate the canvases at the museum dell’ Orangerie won’t be ready until May 1927. The delivery had happened the year before when Monet couldn’t paint anymore (he would die in December), but he considered the cycle incomplete. 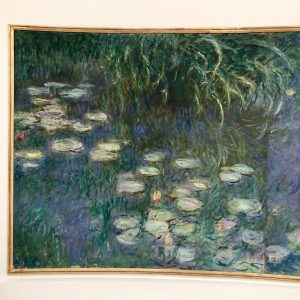 When Monet took his last breath, his body was exposed, covered by a black drape, in Giverny’s kitchen. When Comenceau arrived, well knowing the hatred of his friend for that not-color, he impetuously tore away the drape and replaced it with the flowery drapes of the room.

These are just some of the thousands of stories of Giverny. I invite you to discover more of them, but be wary: it can happen that they change with the seasons….