Near place de la Nation, in the XII arrondissement, there’s a private cemetery with a fascinating story. (35, rue de Picpus, opened Monday to Saturday from 14 to 17).

At the peak of the Terror, the efficiency of the guillotine made the problem of public hygiene the first item list on the agenda. The huge amount of blood flooding because of the executions stank out the air around the gallows, and the mass graves were already overflowing with corpses.

Under the pressure of the citizens living in the affected neighborhoods, exasperated by the stench – and also to find new burying grounds – the guillotine was moved to different spots in the city. We can follow it from place de la Concorde to Place de la Bastille and finally to place du Trône Renversé (‘Square of the Upside Down Throne’), known today as place de l’Île-de-la-Réunion in the south-east of Paris.

But where to dispose of the macabre results of the executions?

At just a small distance from the guillotine, in the Picpus village, the Revolutionary government had confiscated, two years before, the Convent of Saint Augustin’s Chanoinesses: a free terrain, national property, surrounded by tall, discreet walls… who could ask for more?

They were between 16 and 85 years of age – 1109 men and 197 women – and came from many different social backgrounds: marquises and miners, princes and wine sellers, soldiers, and great ladies of an already bygone era. Their names are today remembered on the walls of the cemetery’s chapel.

To avoid new protests from the people, the burial ground was kept secret, but some citizens managed to discover it. It is said that between them there was a young woman, Mademoiselle Paris, who had been ordered to follow the cart with the corpses of her father and brother to the gate of the property.

Even after Robespierre’s – known as the architect of the Reign of Terror, even if he wasn’t the only one – fall, fear took its sweet time to fade away. The relatives of the executed who wanted to find the corpses of their dear beloved still had to move secretly. 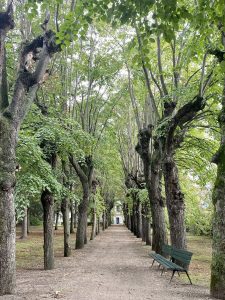 In 1797, Princesse Amélie de Salm-Kyrbourg started to search for the corpses of her brother and her lover, Alexandre de Beauharnais, the first husband of Joséphine de Beauharnais who will later become empress beside Napoleon Bonaparte.

Thanks to the help of local citizens, like the mysterious Mademoiselle Paris, the two mass graves were found. The land had been parceled out and put up for sale without disclosing, of course, its grim content.

The princess acquired one of the lots, by proxy and secretly.

At the beginning of 1800, more lots were bought by Madame de Montagu and her sister, Madame de La Fayette, wife to the famous marquis, the hero of the American War of Independence. The two women were looking for the mass grave where the bodies of their grandmother, mother, and older sister had been thrown into.

To manage to repossess the whole lot, the two sisters decided to found a society with all the families of the guillotined in place du Trône-Renversé.

So it was born, at Picpus, a commemorative place where to go and pay respects to the victims of Terror, and a cemetery that is still now ready to host exclusively the descendants of the executed between June and July 1794. 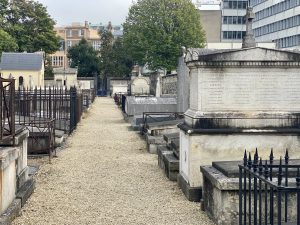 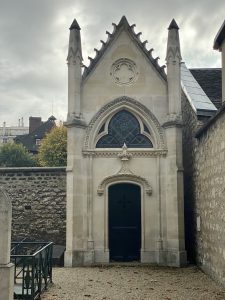 Marquis de LaFayette sleeps in the cemetery wanted by his wife, right beside her, buried with the same land he himself imported from America to this end. 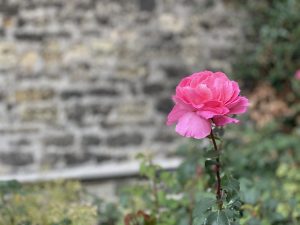