The passion for sweets, candies, and chocolate is a very old habit of French people, but almost no-one ask themselves who’s to thank for this concert of flavors.

I got curious after entering this ancient shop in rue du Faubourg Montmartre. Please, allow me to present the delicious wonders by À la Mère de Famille, the most ancient chocolate shop in Paris.

The façade is still the one the owner had made at the peak of the Belle Époque, but the founding of the maison dates way back, more precisely to the reign of Louis XV, in the heart of the Ancienn Régime.

Chocolate: a delight for the élite

France discovered chocolate in 1615, on the occasion of the nuptials between king Louis XIII with the famous Anne of Austra, the Queen of France Alexandre Dumas celebrated in his novels (the one with the diamond necklace and the musketeers, to be clear).

At the time, chocolate existed only in the form of a hot beverage and had an exotic charm because it came from the far-off Americas.

The price of this luxury was so inaccessible that it became a court habit only later, thanks to Louis XIV, the Sun King, and his wife, Marie-Thérese of Austria.

If you think that is right during their reign that the horrifying Affair of the Venoms exploded, it kind of begs the question if chocolate was used exclusively for the guests’ delight…

In the XVIII century, the exotic and elegant habit of consuming chocolate lived on, so much that Queen Marie-Antoinette had a cup every morning for breakfast.

From that moment on, the chocolate factories boom became unstoppable. Thanks to the development in cocoa manufacturing we got Nutty Chocolate (1830), and the first chocolate bar (1847).

In this case, we can declare that the Crusades brought back something “good” to Europe. It was right in the XII century when cane sugar started to be imported from the Mediterranean basin. 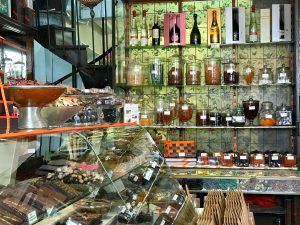 For the whole Middle Ages, this new “spice” was sold at a high price as a medicinal remedy.

Later, marmalade and candied fruits manufacturing became the real luxury production, having its peak starting from 1300, when Europe started organized commerce of sugar.

The oldest recipes still enchanting our palates date back to those days: sugared almonds, nougat, pralines… at the great lunches of fashionable aristocrats these drageries were a must-have. They were also known as “chamber spices” and were offered to help digestion. What a nice excuse. 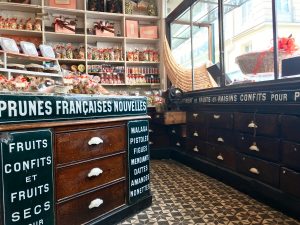 But why “chamber spices”?

The legend says that a cook, during the Middle Ages, had the idea to serve his master’s guests some “digestive spices” to eat once they went back to their rooms. He had obtained them roasting together cereals, pine nuts, almonds, cinnamon, ginger, and cane sugar.

During the Sun King‘s reign (XVII century), always just for nobles and rich bourgeoisie, candies were all the rage, and the first marrons glacés, savored between a hot chocolate and the next. 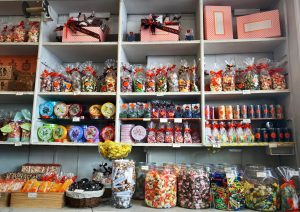 Exactly as it had been for chocolate, in the XIX century these exclusive delicacies started to spread to the less rich people too, especially thanks to the arrival of the sugar beet.

Now considered a key part of the national cultural heritage, the French confectionery industry was born just then.

À la Mère de Famille, a grocery shop that never moved since 1761, you could breathe some of this fascinating history, so much that the place has been classified as “historical monument” in 1984. 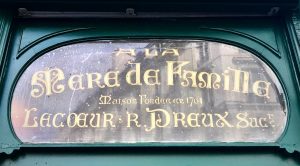 Chocolate-based products are created, starting from raw material, directly inside the maison, so good tasting, or rather “good digestion”, as the great lords and ladies of their time would say! 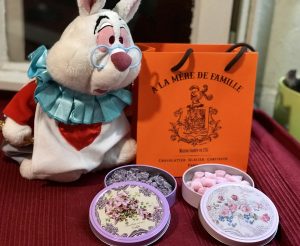