The most beautiful English-style park of the Ville Lumière, park Buttes-Chaumont (1 Rue Botzaris, nel XIX arrondissement), hides a dark past. 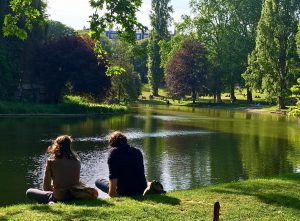 It’s difficult to believe, I agree. This masterpiece of landscape architecture from the XIX century fills you with calm and relax as soon as you pass its gates.

The peaceful tree-lined promenades, the downward slopes, the enchanting curves of the paths, everything in this parks conspires to make you smile, however… 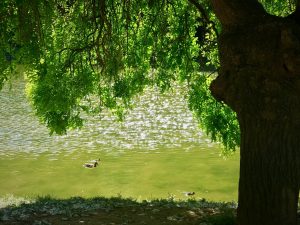 Buttes-Chaumont park’s first magic is its own extension. If you look at a map, the half-moon shaped outline of the park extends for around 62 acres, nothing impressive compared to other Parisian parks. Still, walking inside it, it really feels never ending. How is that possible? 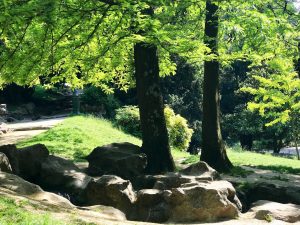 This is the incredible power of the English-Style garden, a kind of garden that caught on from the end of the XVIII century. Queen Marie-Antoinette herself had one set up in her personal refuge in Versailles: the Petit Trianon.

It became highly fashionable during the 1800s, a great number of green spaces around Europe were redesigned in English-style. Curvy paths, an apparently – but just apparently! –  free-to-grow greenery, differences of height, sudden changes in perspective, horizons appearing and disappearing behind hills, rocks or small, quirky buildings, dark paths shadowed by artificial grottos… everything to create the illusion of much bigger spaces than the real ones. Et voilà, the magic is done! 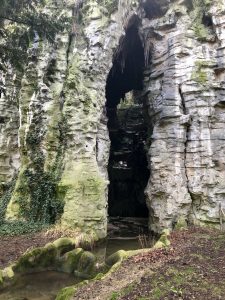 To whom we owe such marvel? When the park opened his gates, the Second Empire was in full swing (April 1st, 1867), so who could be the perpetrator if not the right-hand man of Emperor Napoleon III himself, the Seine prefect Baron Haussmann?

The Baron wanted to give the expanding city a new green area.

Studying the map, his eyes caught an ancient gypsum quarry on the north-eastern border of the residential area. It had been an active extraction site during the Middle Ages, but now it was a haven for outlaws, beggars, and cutthroats. The name “Buttes-Chaumonts” could come from “Calvus Mons” (‘Bald Mountain’), which meant it didn’t have any trees and looked quite barren.

A dark and dangerous place, where, until the Revolution, stood a famous gallows with his whole weight of suffering. We’re far from the pastoral paradise we know and love today, no doubt. 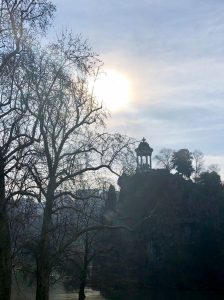 Adolphe Alphand, the architect Haussmann chose for the project, had to face a lot of technical problems (often solved with the help of dynamite!), but the final classy touch is owed to Gabriel Davioud (1825-1881) who put the proverbial cherry on top, designing the wonderful Sybil Temple – based on the Vesta Temple in Tivoli – as the crown jewel of the park’s panoramic viewpoint. This architect, to be clear, is the same who created the famous Saint-Michel fountain in place Saint-Michel (V Arrondissement). 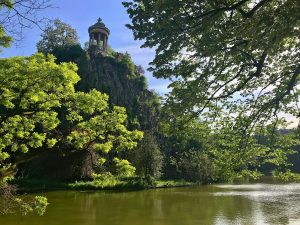 It is said that the whole park had been designed following mystical proportions following esoteric orders that would give the park a particular aura.

The Sybil Temple itself would be at the center of a magic pentacle, of which, however, I could never fully understand the development (if someone would tell me, I’d be happy!). 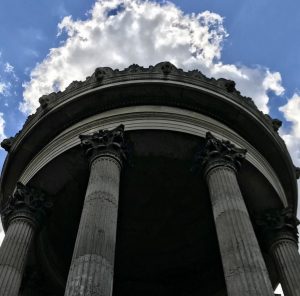 From the temple, there’s a wonderful view of the city, but this is still not the time to give in to romantic ideas: a disquieting ritual had been going on for years not far from here, and the name of the place holds its sad memory.

Precisely on the other side of the rock wall where the Sybil Temple rises, a simple-looking stone and brick bridge got the tragically famous name of Suicide Bridge. 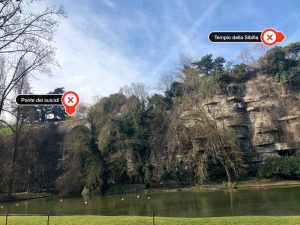 Sadly, it’s not a nickname or an invented name. Between the end of the XIX century and the 30s of the XX century, dozens of wretched men and women put an end to their sufferings jumping down from the – really low – railing of this bridge. Some newspapers, the most cynical ones, came to call it a proper “trend.” 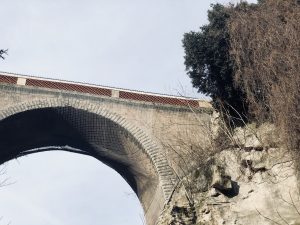 The reason for this particular choice it’s still unknown, but there are many newspaper articles about these sad events. There’s even one about a wannabe suicide victim “unwillingly” lucky. The poor man jumped, but with such a bad aim he ended up tangled in the branches of a tree, miraculously surviving. It appears that the man had learned his lesson and gave up on his insane purpose.

Speaking of this depressing phenomenon, La Presse from July 1oth 1896 ignores the modern sensibility with the following comment:

«The legendary Bridge of Sighs is old news. Now we have the Bridge of Suicides.
It’s nice, like all the rest, in an adorable park, over a very small water pond where the swans majestically parade. It’s the brick bridge at the Buttes-Chaumont.
What a wonderful landscape to die!… it appears that twenty-nine people, in the last month, who came here to put an end to their lives have been able to execute their fatal design. […] to be honest, you have to be really furious with your life to choose to end it in the heart of such an Eden». 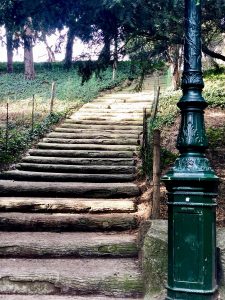 Suicides, victims of persecutions, dead-men-walking, scum of every kind… that’s what hides behind the Buttes-Chaumont park, which however never stops enchanting with his powerful charm its visitors, granting the sweetest relief thanks to its pleasant hills and his elegant paths, rimmed with century-old trees. 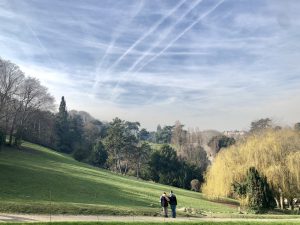 Sometimes you could meet its shy inhabitants… 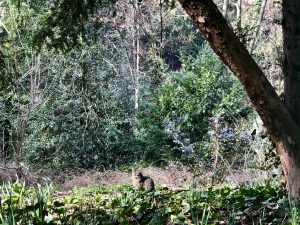 More often, you could find wonderful masterpieces, like this mysterious Pan, God of nature, who sometimes doubles as a babysitter, with wonderful results. 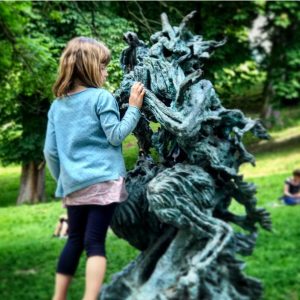 The sweet atmosphere of this park reminds me of one of a small garden I mentioned in another article, as green and disquieting as this one: the Square du Temple.