Little Louis-Joseph de Bourbon-Condé (1736-1818), at just 4-years-old, was the heir to one of the largest fortunes of France.

The young duke was proud of its lineage, and he showed it by taking back the title of his illustrious ancestor – the Grand Condé – that his father had chosen to forget. Louis-Joseph was the last prince de Condé.

Faithful to family tradition, the prince made some improvements to Chantilly, as his father did before him.

(Also read “The Ghosts of Chantilly: The Enlightenment“)

He was particularly interested in the outdoors, because in the XVIII century it was the spectacularity of the garden the true sign of wealth and sophistication of its owner, often more than the residence itself.

The western gardens of Chantilly castle – that had shocked the Sun King’s court back in the seventeenth century – were further developed and turned into a sort of ancestor of our amusement parks: games, mazes, rooms for shows or music, even idyllic thickets turned into en plain air apartments…

It was maybe nostalgia that brought Louis-Joseph to build right here, on the extreme end of Love Island, the Venus Pavillion (1765)

Inside, the little building was decorated by gallant and rural scenes, as the fashion of the times dictated. There were water spouts creating enchanting light games right out of the windows.

Why nostalgia? Because just five years before, after a long and painful illness, the prince had lost his beloved wife: Charlotte Élisabeth Godefred de Rohan-Soubise (1737-1760).

Even if he was barely 23 years old, the prince never remarried but late in life – and after years of relationship – with the widow of the Prince of Monaco, Caterina de Brignole (1808).

The Venus Pavillion didn’t survive the years of neglect that followed the French Revolution – the prince escaped abroad to guide the contro-revolutionary army – but during the XIX century a part of the Love Island has been refurbished, and it’s worth a visit. 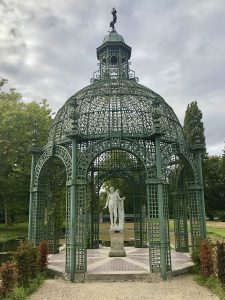 The prince’s son, Louis Henri de Bourbon (1756-1830) got married in April 1770 with Bathilde d’Orléans (1750-1822), the sister of the Duke of Chartres, the future Philippe Égalité, whose controversial story we have already told (read the article here).

To celebrate the merry event, Chantilly was equipped with a building that could gather the members of the most illustrious families of the time.

In 1769 was built, East of the chateau, a long, completely independent, neoclassic wing.

The spectacular dependence had an Italian-style roof, low and hidden by a stone balustrade. Inside, there are sixteen apartments on two levels.

Despite the lavish celebration, the couple wasn’t happy – maybe because the groom was just about fourteen years old and the bride twenty?! – so much that they split in 1780.

The only heir of the couple, Louis Antoine de Bourbon, Duke d’Enghien (1772-1804), gave the name to the new building – that was now called château d’Enghien – because he had been brought there right after miraculously surviving a very difficult birth.

We now know that the wealthy classes of the XVIII century were deeply influenced by Rousseau’s work and the informal, free and “natural” way of life they depicted. Now, even if the rural life that aristocracy dreamed of was completely idyllic and far from the truth, the gardens had to match the fantasy.

The Prince de Condé wanted Chantilly to have the hippest of gardens, in the so-called “Anglo-Chinois” style (‘Anglo-Chinese’), so the complete contrary to the French garden that had been, until then, the main attraction.

The Romantic era was in its early days. Sense was giving way to sensibility so, rather than a perfectly landscaped view shaped by a human’s intervention, it was the time for a nature that became little by little more free, wild and “unpredictable”.

Even Queen Marie-Antoinette wanted for her personal haven, the Petit Trianon in Versailles, an anglo-chinois garden, following the example of the Prince de Condé’s one in Chantilly and the Duke of Chartres’s one in Paris (today, it’s the area of the Parc Monceau).

Same goes for the Hameau that the prince built, in Chantilly: the “perfect” town designed by Leroy between 1775 and 1783 that Mique, the queen’s favorite architect, personally visited. The resemblances with the Hameau of the Petit Trianon is clear to everyone who’s been there. 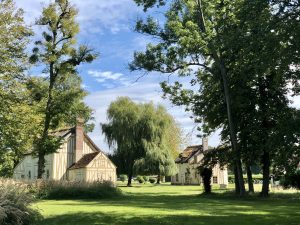 The building – or rather, huts – are built with wood, lime, and straw. Everyone served a different function: pool room, reading room, dining room. The interior of the former one has the fresco of a boschereccia (‘woody scene’), a painted illusion mimicking a wood or a rural landscape.

After the fall of the Bastille and the start of the French Revolution, the prince decided to leave France, disappointed by the too “soft” approach of king Louis XVI.

Chantilly’s darkest days had begun. After the fall of the monarchy (August 10, 1792), it was impossible to protect the castle from pillaging.

Under the Reign of Terror, the castle, at this point plundered of the furniture and removable riches, became a prison, the stables, barracks. The park was parceled out and sold, just like the Grand Château, demolished and sold, stone by stone.

But the domaine of Chantilly was far to be left on its own… (to be continued!)