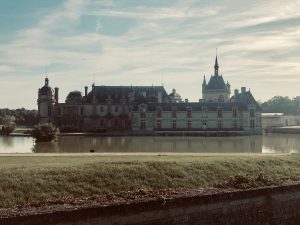 Once upon a time, there was a rocky outcrop right in the middle of a pond, along the ancient way connecting Paris to the northern region of Picardy. During the XI century, here was built a defensive stronghold.

During the Middle Ages, the fortress expanded until it covered the whole little island (to be honest, the little islands are two, but the second one has been completely swallowed by the size of the modern complex).

It’s still possible to recognize in the castle its strange triangular map, and the foundation of the ancient fourteen-century towers (5 out of 7, not bad!)

If the building went from being an anonymous fortress to a castle that made the kings of France envious, it’s thanks to their illustrious owners, whose personal lives could be worthy of a novel, or rather an entire saga. So, without further ado, let me introduce them.

The incredible Anne de Montmorency was a great soldier and statesman, and was the right-hand man of king François I, his son Henri II and even of the latter’s widow, the famous Caterina de Medici’s.

During the bloody Religion Wars, Anne was part of the moderate Catholics clan, close to the protestant (the so-called “Huguenots”). He saved the lives of a great number of protestant artists during the persecutions, and his sister Louis even married an Huguenot nobleman. She was the mother of the illustrious Gaspard the Coligny, who later became the leader of the protestant nobles faction.

Nonetheless, in one of the bloodiest eras France has ever known, Anne de Montmorency lived to be 74 years-old, dying for severe wounds suffered on the battlefield!

We owe to him the first great transformation of the castle, which left behind its obsolete medieval appearance for a more “modern” look, the Reinassance style typical of the XVI century.

Even if the triangular building has been mostly demolished in the riotous years of the French Revolution, duke Anne’s touch lingers elsewhere.

For example, in the castle’s park – whose extension today is “just” 115 ha of the original 900 – Anne built seven chapels, seven pilgrimage stations of which four still exist (ca. 1535).

Anne de Montmorency’s so-called Petit Château (‘Little Castle’) is one of the few places that survived the revolutionary plunders of the end of the eighteenth-century. It was built on the second little island of the pond, near the one where the original medieval castle was built (1560).

The new building, wanted by the duke of Montmorency, followed the aesthetic fashion of the time: a low, regular home, surrounded by water and gardens, like the villas in Florence.

Faithful to his father Anne’s policy, Henri de Montmorency too sympathized with the protestant masses during the Religion Wars. Because of this, he fought beside Henri IV, the famous Heugenot king who converted to catholicism. The kind called the duke “my pal”.

At the beginning of 1600, Henri de Montmorency had some refurbishments done on the eastern side of the pond. So, the place was named Sylvie’s Woods, afterthe forest nymph.

Near the spring pouring beside the pond, was built a place for quiet and pleasure, with a garden (1604-1606), the Maison de Sylvie.

According to King Henri IV, Chantilly castle was “the most beautiful residence of all France“, and he uselessly offered “his pal” to exchange it with any of the many royal residences. No way, the duke never surrendered his castle, but His Majesty spent a lot of time here, even a bit too much, even when the landlord wasn’t there!

The official reason for this predilection was hunting, and Chantilly’s wonderful park overflowing with game, but the duke knew his king too well to ignore the true reason of such dedication: being a refined lover of “natural beauties”, the king had set his sight on the young daughter of the duke, Charlotte-Marguerite (1594-1650).

To have Charlotte all for himself, the king had her marry his cousin, the Prince of Condé, who was said to have an inclination towards men (1609).

From their union was born the legendary Louis II de Bourbon-Condé also called The Great Condé (1621-1686), future owner of Chantilly and cousin to Louis XIV, the Sun King (I will tell about him in the next article).

Charlotte’s brother, Henri II de Montmorency, married one of queen Maria de Medici’s cousins, Maria Felice Orsini (in French “des Ursins”), to whom he consecrated the Sylvie Woods, included the little Maison of the same name built by his grandfather.

They had a happy marriage, and when Henri died the grieving widow retired in a nunnery. The duke had dared to plot against Cardinal Richelieu, the powerful éminence grise operating during Louis XIII’s reign, and for that, he had been sentenced to death.

Chantilly was then confiscated, with the chance of being a royal residence forever, just like Louis XIII’s father, Henri IV, had dreamed it to be. It was thanks to the political maneuvers of his late flame, Charlotte-Marguerite, if the castle will go back to whom it belonged to.

Thanks to that, the castle passed down to her son, the future Grand Condé, marking the beginning of a new glorious era for Chantilly…