Henri d’Orléans, Duke d’Aumale (1822 – 1897) was the last owner of Chantilly and, at the same time, the one leaving the most evident mark on the domaine.

You can breathe his memories in almost everywhere, also because the estate was passed down to the Institut de France with the caveat that nothing in the arrangement would ever be changed. 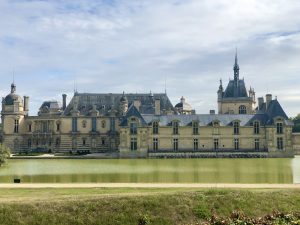 The young duke Henri inherited the castle unexpectedly, as we have seen in the last article, but it was immediately clear how much the estate was dear to him.

For instance, there were intense and countless discussions with his father, king Louis-Philippe d’Orléans about the restoration of the Grand Château (‘Great Castle’) destroyed during the French Revolution.

The king thought that the expense was unreasonable – and we can’t blame him – not to mention the crazy sums that the duke was already spending for his precious collection of artwork and ancient books.

Against all odds, the ambitious project of the duke d’Aumale took flight, one wonder at a time: let’s discover them together.

In 1844, duke Henri married Maria Carolina di Borbone, also called “Lina”, princess of the Two Sicilies (1822-1868). The future duchess wasn’t particularly enthusiast of the choice, but she followed her family’s choice, as was tradition.

To properly welcome his new bride, the duke prepared some apartments on the ground floor of the Petit Château (this marvel has been recently refurbished and is accessible today with a guided tour)

The new water-facing apartments had a surprisingly high privacy level for the times: the long line of rooms – typically positioned one after the other – was reserved to the lords.

The servants were “redirected” through an external gallery, the Duban Gallery, designed by Felix Duban, added to the internal court of the Petit Château.

The new apartments are proof of the eclectic taste of their time, and every room has an interior design dedicated to a different historical period. After all, the Duke d’Aumale lived in a period bathed in nostalgia for the past, as we have seen in the Musée Jacquemart-André.

The Duchess’ room, for example, was decorated in Louis XV-XVI style (XVIII century).

The duke’s room is plated in Louis XV style panels (Rococo) and the furniture is a mix of different styles, following the fashion of Louis-Philippe kingdom’s period (1830-1848).

For the interior decor, the duke called Eugène Lami who had already worked for the duke’s family at the Palace of the Tuileries, in Paris.

I found the collection of portraits in the Salon de Condé particularly moving.

Knowing the loneliness in which the duke lived, it’s harshly evident the necessity of surrounding himself with beloved faces, and the memories of the greatest names of the family history, a sort of long list of domestic gods protecting the castle.

Thanks to her distinguishable sweetness and amiability, the young bride soon won the hearts not only of her husband but of all of his relatives.

It would look like a happy ending, but let’s not fall for this: it’s the nineteenth century, and just like in all the period’s novels, tragedy’s ahoy.

The two newlyweds were cousins (Maria Carolina’s father was Maria Amalia’s – the duke’s mother – brother) and blood relations aren’t the best foundation for the descendants’ health.

The duke and duchess had eight children: four boys and four girls of which only two, Louis and François, would survive childhood. 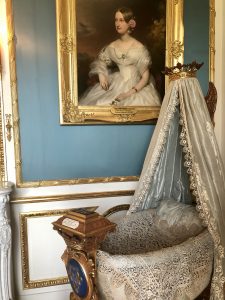 The eldest son, Louis, sailed away when he was twenty years old, hoping to strengthen his health. The change of air had, initially, a really good result, so much that young Louis decided to sail on to Australia… where he fell prey to typhus fever. He died in 1866, in Sidney, far from his beloved family.

To fight sorrow and loneliness, the duke sought refuge in beauty. He threw all of his energies in turning Chantilly in his spiritual testament, the treasure chest of his art collection and his beloved books.

For this, the Grand Château was reborn by the hand of architect Daumet, but the style choice of the new building raised a lot of issues.

To avoid putting out useless instigations in a delicate political period – in the France of that period (1876-1882) there were fears about the return of monarchy – the duke chose the “Valois” style (XVI century), the same of Fontainebleau castle. A classic-style castle (XVII-XVIII century) would have reminded everyone too much of the Ancien Régime…

Four of the seven towers of the medieval castle were rebuilt over the original foundation.

And, of course, could not miss a neogothic-style chapel, something wildly appreciated in the Nineteenth-century.

A splendid honor staircase, a masterpiece of the XIX century, welcomes the visitors accessing the vestibule.

«I’m starting to think I suffer from bibliomania», said one day a worried duke d’Aumale. After entering in his wonderful library in Chantilly, I can’t but share his doubts. 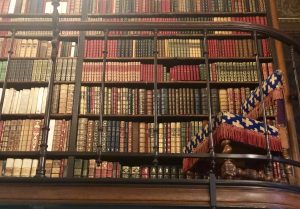 Almost 19 000 volumes, of which two-thousands manuscripts, are exhibited in rotation in designated display cases.

After passing through the official dining room, inspired by Fontaineblau’s castle ballroom and completely dedicated to a hunting theme, historical pride of Chantilly’s forest, we access the true treasure of the castle itself: the precious Musée Condé, opened in 1898.

As specifically requested by the duke, the rooms have been left untouched. Not even the zenithal lightning that was fashionable at the time, and absolutely outdated today, has been changed.

The works aren’t divided by school or period, but as their last owner’s taste: Raffaello, Corot, Raffaello, Corot, Filippo Lippi, Delacroix, Van Dyck, Watteau, Pussin – just to name some –all live happily together side by side, or rather “frame by frame”, because of the horror vacui typical of the XIX’s painting exhibitions.

One of the duke’s goals was to find and bring back home artworks and art objects lost throughout Europe during the French Revolution.

The solace he found in the art couldn’t help him face the last, heavy blow that Henri d’Orléans, Duke d’Aumale, was destined to take.

Henri was 75 years old, and he was in Sicily. His niece, Sofia of Bavaria – the favorite sister of Sissi, Empress of Austria – was taking care of a charity sale at the Annual Charity Bazar in Paris, when a terrible fire broke out.

Responders took, as was normal for the time, fifteen minutes to get there, but the tragedy was already over. 126 people died that day, including Sophia.

It was a terrible blow, but also the last one: three days later, the duke d’Aumale passed away.

That was the last episode of Chantilly’s saga, in a not too merry mood, I admit. I hope I didn’t sadden you too much: Chantilly’s castle is well worth a visit, and the wonders to discover are many, many more. Happy exploration!

All articles in the Series
← Previous post
Related articles