Louis-Henri, duke de Bourbon (1692-1740)was the great-grandson of the Great Condé, the audacious cousin of the Sun King (Louis XIV), who more than once showed his valor on the battlefield.

Despite his great-grandfather’s fame, Louis-Henri chose not to hold the title of “Prince de Condé”, a too much stern and “heavy” heritage for the typical levity of the Enlightenment.

(Also read: “The Ghosts of Chantilly: the Condé Era“)

Determined to own a modern residence that’d be the dream of every hunting buff like he was, the duke started a series of refurbishments that would have transformed the face of the Chantilly domaine.

The most spectacular of those interventions, the perfect example of the Louis XV architectural style, are the Great Stables (1719-1735), designed by architect Jean Aubert. From the simple lines of the façade, we can infer that the Classicism of the previous century was commonplace (the interior design was a completely different story, as we’re going to see).

The colossal building could hosts up to 240 horses and 150 dogs, not to mention the space for wagons, depots, sleighs for the winter…

Today, the stables are the site of the Horse Museum, of the racetrack and they keep their intended function. Not surprisingly, Chantilly is also known as “the Horse town”. 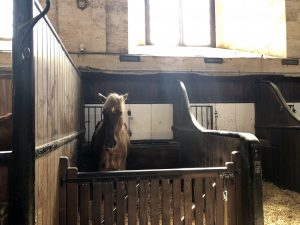 To accommodate the stable workers, a completely independent neighborhood was built near the town. We tend to consider such an endeavor nearly madness, but we should remember that, at the times, riding was considered one of the major arts!

The sculpted decoration of the ensemble was entrusted to Remy-François Bridault (he worked on that between 1734 and 1736), of which we can enjoy the wonderful Rococo drinking trough.

The stables are built on the great meadow South of the castle, beyond the road leading to Chantilly village. If the stable’s position seems unusual and uncomfortable, this is just out of respect for the beautiful perspectives of Le Nôtre gardens, that would have been compromised by the enormous building.

To complete the harmony of the ensemble, the Duke wanted to connect the castle’s stables through a majestic arc that would, at the same time, be a monumental entrance to Chantilly village. The work was never finished because Louis-Henri died (1740).

Fun fact: architect Jean Aubert also worked for the duke’s mother, the charming Mademoiselle de Nantes, who was none other than the oldest of the great number of illegitimate children born from the passion between the Sun King and Madame de Montespan.

For her, Aubert created the Palais de Bourbon in Paris, today seat of the National Assembly.

Between 1718 and 1722, Aubert also devoted himself to the completion of the Gallery of Great Condé’s Achievements and the modernization of the Grand Apartment that the Great Condé himself had set up on the first floor of the Petit Château at the end of the XVII century.

The refurbishing’s result is quite different from the stable’s exterior: we’re gawping at the triumph of the Rococo style!

The ensemble also known as Grand Appartement was formed by an entryway (today called Guards Room), the room itself – the alcove disappeared in the XIX century when the room was changed into a pool room – and a corner Great Cabinet.

The abundance of decorative motifs of the boiseries (the wood panels on the walls) is typical of the interior of the time. It recalled an idyllic, perfect, and fertile nature.

But the most precious gem is still the room called la Grand Singerie (from “singe“, “monkey”) attributed to artist Christophe Huet (1700-1759). Its unique painted decoration is a rare proof of a “prank” very much loved by the upper classes of the Enlightenment. You need to get closer to see it… 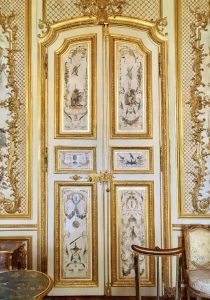 At a first glance, the decoration looks “Chinese style”, as the fashion of the time dictated. The detail is in the fact that the delicate representations of the Arts, Sciences or scenes of war, hunt and play… all show funny monkeys as their main characters!

Just like many other of his peers, the duke of Bourbon was an enthusiastic collector of “chinoiseries”, and a great connoisseur of the Far East. To create the Singerie he had even built a laboratory in the castle so the paints could be created according to the original Chinese recipe!

On the ground floor – but only accessible with the guided tour to the Duke de Aumaule’s apartments – are preserved the panels of the fascinating boudoir completing the set.

Of the marvelous East Gardens of the castle, nothing much remains, but it’s still possible to admire what remains of a life-size chutes and ladders game (a small bridge and some rocks with the number of the boxes). When she visited Chantilly in 1739, queen Marie Leszczyńska, King Louis XV’s wife, had the time of her life! 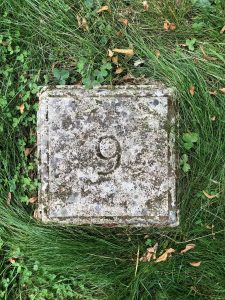 The wonders of Chantilly’s gardens – that just like Versailles was the ancestor of today’s amusement parks – aren’t over yet. With the heir of the Duke de Bourbon, as we’ll see, we’ll attend its swan’s song…