As the stormy winds of the French Revolution passed, Louis-Joseph de Bourbon, prince de Condé, came back to Chantilly after years of exile (1814).

The old prince had been deeply scarred by the events: his beloved castle had been half-demolished, the land partly sold, his second wife, his lifelong companion, had died the year before he returned to his homeland and the last heir of the dynasty – his grandson, the Duke d’Enghien – had been executed by firing squad by Napoleon’s followers in the moat of Vincennes castle. (1804)

The execution followed a show trial that didn’t even allow the defendant a proper defense. The duke had been arrested mainly because he was suspected to have been the mastermind behind one of the many murder attempts against First Consul Napoleone Bonaparte, a clearly bogus claim.

Despite the ruefulness hovering over the Prince de Condé’s coming home, the restoration of Chantilly castle started immediately, under the supervision of architect Victor Dubois.

The park was almost completely bought back and redesigned following the new romantic taste: through vegetation, only apparently left growing wild, long and windy paths were blazed, creating the illusion of infinite spaces. There were sculptures, here and there, streams, grottos, and classic-style pavillions (1817-1820). 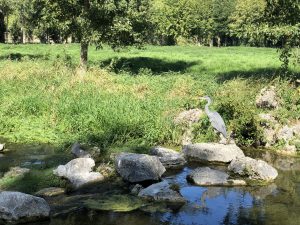 In this new, melancholy-veiled garden – perfectly aligned with the owner’s mood – every element of the landscaped called for meditation and solitude. 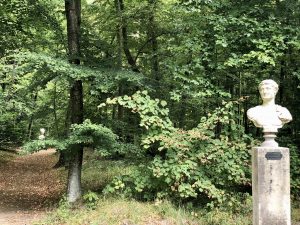 Of the French Garden with its straight, symmetrical lines designed by Le Nôtre (XVII century) only the Grand Canal and the great parterre north of the Castle remained.

A difficult inheritance, a mysterious death.

Right while Chantilly’s refurbishment was in the works, the 82-years old Prince de Condé passed away.

His heir, Louis Henri Duke de Bourbon, inherited the castle, but having tragically lost his only child, as we have just seen, he had no heirs to which pass down the historical family estate.

Ah, history paradoxes! Who would have ever thought that one day, the destiny of one of the most beautiful estates in France would have been controlled by a woman of ill-repute, not to mention a foreigner? Let’s take a step back…

During the Revolution, to escape persecutions, the duke of Bourbon had escaped abroad, just like his father had done, more precisely in England.

Here, he had met a gold digger, Sophie Dawes, who enthralled him so much that, when the storm had passed, the smitten duke insisted that his beautiful lady followed him to France.

The ambitious foreigner became, that way, the informal, and not proper, Lady of Chantilly.

Bent on granting a stable future for herself, without the uncertainty of her role, through careful maneuvering, Sophie convinced her illustrious lover to sign up as the designated heir of Chantilly his godson, a young member of the d’Orléans house, Henri, Duke d’Aumale (1822-1897).

Now, Henri was the second to last son of Louis-Philippe d’Orléans and Marie-Amélie, the sovereigns that the 1830’s Revolution had put on the throne. He wasn’t in line for the throne and, having a lot of brother, a bit more to inherit wouldn’t have hurt the young prince’s destiny.

In exchange for the commitment to this project’s success, the Orléans let Sophie keep some of the impressive inheritance of the Duke de Bourbon.

Just like Cinderella, Sophie seemed to have secured herself a bright future, but tragic news turned suddenly the tables.

In August 1830 the body of the duke de Bourbon was found in his castle of Saint-Leu, hung to a window’s handle: the lord of Chantilly had committed suicide!

It was difficult to believe, since when he was found his feet were touching the ground, and yet, at the same time, no proof of foul play was found. Despite that, the worst rumors about Sophie started to spread like wildfire. After all – everyone knew – the Duke was thinking about breaking up with her…

Everyone would easily be carried away by the intriguing detective story, but there is no proof that the scheming lady was in any way involved in the Duke’s death.

With the arrival of the young Duke d’Aumale, passionate scholar and art lover, Chantilly’s swan song began. Thanks to the passion and temperance of its last owner, this history-packed place was enriched by the precious Musée de Condé, an extraordinary heritage preserving the taste and the soul of its creator.