The elegant apartment buildings of the Monceau’s plain, from which begins the beautiful park with the same name (XVII arrondissement), have a great lot of stories to tell. The first is about their own building, which happened when the Ville Lumière expanded westwards, starting from the second half of the XIX century.

In those times, this neighborhood was almost only residential, very new, and updated to the eclectic taste of the times, and it was, for this, immediately invaded by the rich urban bourgeoisie, followed closely by the most fashionable and successful artists, who could afford the huge rents.

The Musée National Jean-Jacques Henner (43, avenue de Villiers, XVII arrondissement) is a small jewel, just like the chest that holds it, a building perfectly representing its period’s style, the famous Belle Époque – more precisely between 1876 and 1878. 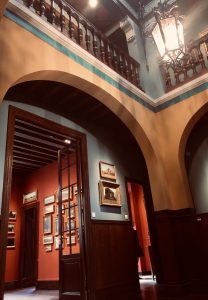 This so-called hôtel particulier is an example of the private architecture with the eclectic style typical of the Belle Époque. It was designed by architect Nicolas-Félix Escalier. This is not a petty detail if you think that Escalier was the man behind another building, right in the next street (35, rue Fortuny), owned by none other than the “Divine” Sarah Bernhardt – the star of the French theatre whose taste was extravagant, to say the least, and that we have already discussed – but back to the point. 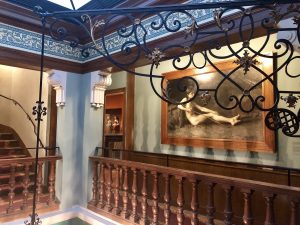 This place was devoted to art even before it became a museum: the artist and interior designer Guillaume Dubufe (1853-1909) occupied it and enlarged it according to his needs (he added an atelier on the third floor, where today Henner’s works are exhibited). In 1921, Marie Henner, widow of painter Jean-Jacques Henner’s (1829-1904) nephew, bought the building from Dubufe’s heirs to exhibit her uncle’s works, and then gift the museum to the State.

This museum is often excluded from the most popular tourist tours, but this blog couldn’t avoid a special mention to Jean-Jacques Henner, the painter of creatures on the border between the material and immaterial world. Henner’s landscapes, just as his portraits, are distinguished by the predominance of blurring, a skillfully applied technique to bestow on his characters a sense of incorporeal existence as if they emerged from the mist of a dream.

The delicacy and the absolutely original light of his portrait caused Henner’s great success in the bourgeois circles of Paris, hungry with acknowledgment and longing to forever capture their image, just like it was done by the ancient aristocracy.

One of the most seductive – Mme Paul Duchesne-Fournet’s – is not in the Parisian museum collection. I found it completely by chance in the LACMA galleries in Los Angeles. The portrait was done in just ten sittings, for the steep sum of 10.000 francs. Today, that would amount up to 30.000 euros.

In his portraits, Henner skillfully employs the background’s shadows, and his predominantly reddish palette, to exalt the skin’s paleness, a quite sensual feature at the times, that today leaves us speechless as if we were in front of a mysterious, ethereal conjuring. 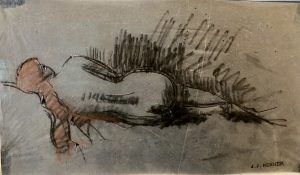 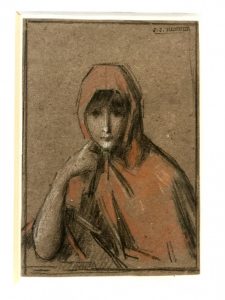 Remaining on the side of all the artistic revolutions of his time, Henner was a solitary artist, a researcher, guided by his absolutely personal inclination of depicting Nature’s delicate presences, essentially feminine, pale, with reddish hair or clothes.

In ancient times, drinking waters were considered sacred, inviolable, and thusly entrusted to supernatural guardians: Naiads or Nymphs. Very close to the deadly mermaids of Homeric tradition, Henner’s Naiads are modeled by shadows and lights of a disquieting, sensual and irresistible nature. Who said that spirits are elusive? Henner’s ard can summon them, and shape them on canvas, leaving them suspended, vague, not yet made flesh, but already out the dream realm.

Could his Naiads be considered a nostalgia for a masterless nature? Did Henner fear the unstoppable advance of the industrial era, just like many other artists of his time?

Having spent time in the impressionist environments, it’s easy to imagine that the painter had frequently debated the topic, considering that the role of the artist towards nature was one of the major themes of the period, together with the detachment from the norms of the official art – the so-called “academic”. Nonetheless, I want to make myself very clear: Henner never truly mingled with the movement that was revolutionizing the art of the XIX century, if anything he ran alongside it. 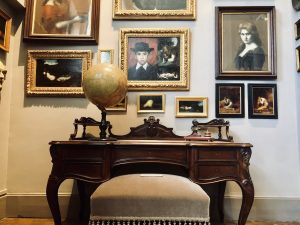 As per his conception of Nature, I daresay Henner didn’t really fear the march of the cold technology and of progress. The creatures living in his paintings seem to smile to the new future Gods as if Henner could perceive primeval powers that not even all the factories of the world could ever annihilate or control.

If you happen to stroll between the elegant buildings of the XVII arrondissement, treat yourself to a visit to this charming, peaceful nook, inhabited by creatures from other dimensions and surely out of time. Have a good time!