The French Revolution is an extremely complex and demanding phase of history that I much prefer to tell through the lives of single characters, and the one I tell you in this article played a key role in the events of that time, just to be overwhelmed by the sudden Luck turncoats that were so common in XVIII century France.

The controversial affair of Louis-Philippe duke d’Orléans (1747-1793) belong to the series “Falls from Grace”.

Louis-Philippe d’Orléanswas the cousin of king Louis XVI, and so the bluer blood ever, being part of the cadet branch of the Royal Family, the closest person to the throne after the king’s two younger brothers.

Despite his illustrious condition, the duke wasn’t welcome at court because of the companies he tended to keep. Liberal and friend of many Jacobins, he let his Parisian home, Palais-Royal, become the center of the opposition to Louis XVI’s already weak government, and the cradle of the revolutionary movement that would, later, overwhelm them both. 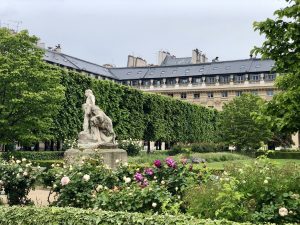 The garden and galleries of the palace were open to the public, and since the police wasn’t, obviously, authorized to enter the duke’s residence, many activities normally prosecuted by the law found, under the beautiful portici of Palais-Royal, a home. Political circles and clubs in primis.

(also read: Palais-Royal, from Ducal Palace to “Temple of Pleasures”) 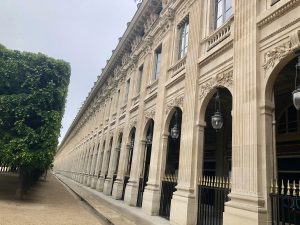 Enlightened or opportunist? Bold or coward? What’s sure is that, at the dawn of the Revolution, the duke d’Orléans was considered a paragon of popular freedom and the subjects, exhausted by taxes, misery, and famine, had for him the respect they had lost for their legitimate sovereign. Let’s see how and why.

The duke had focused popular admiration on himself with a quite smart maneuver during the States-General, the assembly of French population’s representatives divided into the three social classes: the First State, the clergy, the Second State, the aristocracy, and the Third State, everyone without any political weight, adding up to the two-thirds of the national population (lawyers, merchants, craftsmen, farmers…)

More than 150 years had passed since the last convocation of the States-General, and Louis XVI granted his permission with much hesitation, seeing the event as the most clear indication of the crisis his government was in. Reluctant or not, France was drowning in debt because of the wars, and a new extraordinary taxation system was necessary, and that could be approved only by a decision of the States-General.

And here they are, gathered at last:

During one of the assemblies, the duke d’Orléan left his State with other nobles to side with the Third, showing with a flagrant act that he was with the people, of the people and for the people. This gesture earned him the crowd’s adoration and buried his reputation with the most conservative ranks of aristocracy, first of all the queen, Marie-Antoinette.

How to go from “As you command, Duke” to “Howdy, Philippe!”

The duke was ambitious, and this is a fact. The dangerous liaisons he had surrounded himself with seduced him with the promise of the throne, obtaining, in return, financing for the secret societies that were planning the Revolution.

The usually censored press attacking Louis XVI’s government and the Queen’s reputation originated mainly from Palais-Royal, and the gatherings of the Jacobin club happened under the nose of the Duke, at the cafés tables in his beautiful gardens. The political foresight of Louis-Philippe wasn’t at the same level as his ambition, and it’s clear that he couldn’t foresee the violent implications of the revolt that was bubbling under the surface.

The famous storming of the Bastille, for example, started right from the Café de Foy, in Palais-Royal.

Considered the great popularity of the duke when the Revolution started, we could ask ourselves how could he get to the guillotine’s steps, stripped of titles and fans.
Let’s retrace some of his most epic fails.

Following the escape attempt of king Louis XVI and the royal family, stopped at Varenne with an humiliating failure, the duke d’Orléans was presented the crown on a silver platter. His unexpected refusal was a severe blow for his supporters.

Clearly, the turn of events had exceeded his expectations, and the violence of the movement he had been a patron of until that very moment had terrified him deeply.

Philippe d’Orléans, at this point known to all as “Philippe Égalité”, even tried a clumsy attempt at reconciliation with Louis XVI, whose cold attitude towards it could be imagined.

Between all the accusations that the future generations moved towards Philippe Égalité, the most difficult one to try and justify is connected to the same Louis XVI’s trial. In this occasion, the duke, who had witnessed the most violent acts of the Revolution (the crowd assaulting the royal palace of the Tuileries in Paris, the incarceration of the Royal Family and the terrible September massacres), couldn’t find the strength to rise in defense of his cousin, on the contrary, he voted in favor of the death sentence. Not only this gesture had a tragic epilogue, but it didn’t even achieve what he had hoped for: instead of appeasing the enemies of the old monarch, he ended up mostly disgusting them.

Probably raked with guilt, when the Terror started to move his first, bloody steps, Philippe Égalité tried to find some way to atone, secretly saving the lives of many persecuted. Let’s not forget the probable, unconfessed hope to be saved by foreign armies marching towards the capital. Noble or not his motivating force, the Duke decided to betray the revolutionary movement that had helped him to emerge.

Philippe Égalité’s fate was sealed the moment his son, the duke of Chartres, deserted and passed to the side of the foreign enemy. The ex-duke was arrested, together with his supporters, and he underwent a very fashionable treatment at the time: the all inclusive “Trial-sentence-guillotine”, offered by the ruthless revolutionary tribunal.

In happier times, Phipille had dreamed the crown, and because of that, he let others manipulate him like a puppet until he was compromised on all sides. Now that – in rather general terms – you know all the events that overwhelmed him, I leave to each one of you the freedom to draw their own conclusions or to research what happened in a much deeper way.

As far as I’m concerned, I choose to abstain from a judgment that sounds too easy and to drift on some questions that, one day or another, I really want to unknot. If the nature of the duke d’Orléans doesn’t really shine of merit in the face of historical events, it’s also true that trying to dip our modern minds in a period so subjugated by fear – or rather Terror – isn’t an easy task, at all.

I’m going to productively use the figure of the duke as food for thought, to try and understand the ways in which the single people chose to face such a violent change of regime – more, of an era! – being forced to handle the loss of all the cardinal points and values that had guided them until that very moment.

To the next affair!