Cardinal de Rohan demanded an irrefutable proof from Jeanne de La Motte. The unscrupulous schemer claimed to have been able to talk Her Majesty, the Queen of France Marie-Antoinette, into reconsidering her harsh position towards the Cardinal.

(Read about how the Cardinal made Marie-Antoinette angry years before, and how he met Jeanne de La Motte, the woman who would ruin them both, in the article: How a blue-blooded thief can rip-off a Cardinal)

Jeanne de La Motte arranged at first a written correspondence, as much false as unlikely, between the Cardinal and Marie-Antoinette. In the forged letters signed “Marie-Antoinette de France“, brought by Jeanne and voraciously read and kissed by the Cardinal, the Queen promised a total and sublime reconciliation. But when the Cardinal demanded proof that his dreams were coming true – he could already see himself reinstated at court with full honors, a protege of the Queen and maybe even given the position of Prime Minister – Jeanne found herself in a corner. Anyone else would have backed out, but certainly not wildcatter countess de La Motte. She then, showing the most brazen smile, announced the Cardinal that Her Majesty would meet him. Kudos on the poker face, countess!

Jeanne’s statement would have never persuaded anyone with a smidge of grip on reality, but that was sadly not the case of Cardinal de Rohan. The incredibly proud queen Marie-Antoinette wasn’t the kind to forgive an insult, not to mention that she would have never ever gone to any secret meeting, even in the heart of Versailles’s gardens, not even for the Pope himself! Nonetheless, the Cardinal happily accepted Jeanne’s invite. The meeting was set for August 11th, 1784, in Venus’s Thicket, today Queen’s Thicket (Bosquet de la Reine).

Not so long before, countess de La Motte’s husband, Nicolao, met in the gardens of Palais-Royal, in Paris, a young blonde girl called Nicolette who, to make ends meet, sold her services. Nicolette, even if younger, she looked amazingly like the Queen. Luck? I don’t think so: in the gardens of Palais-Royal, there were a lot of bawdy houses. To attract costumers many “professionals” specialized. A girl with features so similar to the queen could only sell herself as Marie-Antoinette‘s doppelganger.

After seeing Nicolette, it didn’t take Jeanne long to hear crime’s bells and organize the setup to serve her purposes. After lying the poor girl’s ears off, she dressed her up like the queen, veiled her face, gave her a rose and a note and told her to offer her hand to be kissed by the one who would have thrown himself at her feet: with that, she would have helped an important person who would have handsomely rewarded her. The camouflage Jeanne used to disguise the young girl was the simplest ever: the snow-white chemise (nightgown) that had stricken the popular imagination the year before, thanks to the scandal of Madame Vigée Le Brun’s portrait.

Everything went according to plan. Almost. That August evening, in the royal palace’s gardens, Nicolette was so nervous that when she saw an adoring, lavishly dressed stranger fall at her feet, she dropped the rose and forgot the note. But that didn’t matter, because meanwhile, the Cardinal had assaulted her dress with kisses, wetting it with tears. The dream was short-lived, then Jeanne’s minions took them apart. 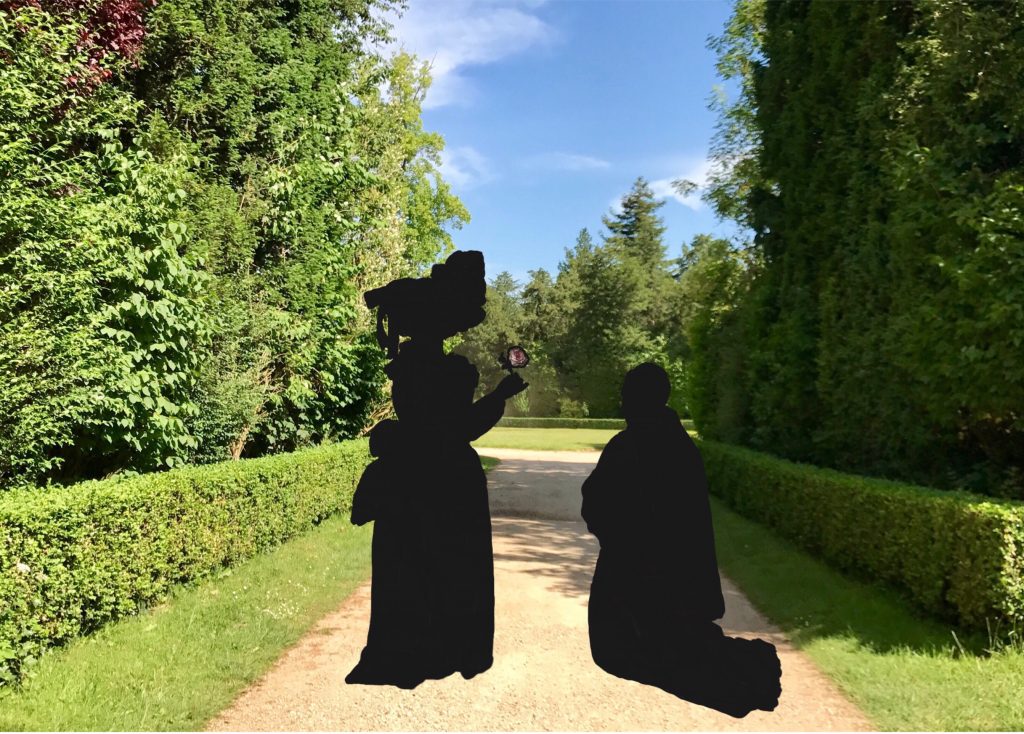 That was enough for the Cardinal to trust Jeanne completely, not to mention to open his purse strings, bien sûr! This strange event partially explains how countess de La Motte was able to involve the Cardinal in the Necklace’s affair without great resistance on his part.

Later on, Parisian high society’s gossips brought the tragicomic story of the most expensive necklace in the world to Jeanne’s attention. Could the countess’s greed let her miss the chance to look into something like this? We know the answer to that. We can easily imagine Jeanne, with her best dress on, and the cutest of smiles, going to the jewelers, Bohemer and Bassanges and, while glamorously chatting, refer to her friendship with Cardinal de Rohan and, quite naturally, with the Queen herself. And so she listens, full of concern, to the sad story of the two desperate jewelers and, showing the utmost interest in their precarious situation, asks to see the object.

Sure thing, the sole sight of the shimmering treasure titillated Jeanne’s greed so much that the reckless roman promised the two jewelers to bring the matter of the acquisition before Her Majesty again. But, should the Queen finally decide to buy the necklace, what would the countess want as a reward? «Nothing!» madame de La Motte guaranteed, she was acting only out of a good heart, and to be of service to her queen. The two simpletons were told not to insist, or she would be much offended. What a heart! What a lady! The fools’ saviour and Paris was apparently filled to the brim with fools.

She then revealed to the jewelers, with plenty of forged papers, that the Queen wanted to proceed with the purchase without the King knowing, and that Cardinal de Rohan would have followed up the negotiations for her. Of course, he would! He would have done anything Jeanne asked of him in the name of the queen…

(Read about how badly this story went in the article: How did the Affair of the Diamond Necklace start, and the strange trial that came from it)