In the previous article I talked about the founding of the first Cabaret du Chat Noir, wanted by irreverent Rodolphe Salis in the autumn of 1881. I have there already mentioned its clientele’s not indifferent worth, as it was composed by some of the most brilliant minds of their time. Let’s now see some of those “boons” to let them tell us about the brilliant, boisterous spirit livening up the quarter at the feet of Montmartre’s hill during the Belle Époque.

The Magazine of Le Chat Noir

The fame of the Cabaret du Chat Noir, then to be found at 84 boulevard de Rochechouart, had spread so much around Paris that Salis decided to create a magazine with the same name, whose copies are sometimes found by the famous bouquinistes, the stalls of out-of-print books, newspapers and prints along the banks of the Seine.

[You can also read: The Boquinistes: a path of paper treasures along the Seine]

The first official number of the Cabaret du Chat Noir came out on January 14th 1882 – just months after the opening of the cabaret – and was the result of the intellectual and economic contribution of the customers of the namesake place.

The magazine was the natural product of the intellectual agitation livening up the cabaret. It was printed in 1000 copies and it contains the signatures of the best writers, songwriters and humorists of the time, not to mention famous artists like Willette, Steinlen, Caran d’Ache… all customers of the Chat Noir!

The most mischievous and brilliant hill of Paris hosted the intellectual, creative and revolutionary life of the city, openly challenging the stiff and boring bourgeois society of the western quarters. The most interesting thing is that, believe it or not, the rich bourgeoisie came right to Montmartre to look for fun and distraction! Now, one of the contributors to the magazine of the Chat Noir there was Alphonse Allais (1854-1905), one of the most illustrious names of the golden age of journalistic satire. Allais was the perfect personification of the rebel spirit of Montmartre, traditionally symbolized by the cat, independent creature normally intolerant of limits and rules, which we find, unsurprisingly, as an icon of his favorite cabaret.

To have a more precise idea of the attitude of the unique clientele, of which Allais was the perfect example, you must keep in mind that the writer as one of the main characters of the much derailed and brilliant Club des Incohérents (‘Club of the incoherents’). This exclusive circle, formed by selected writers and artists, dedicated most of their time to debunk, mock and bug everything that could catch their interests. Just to give you a clearer picture of the level of the public happenings the club organized, I just have to quote the titles, like:

“Exhibit of drawings by geniouses who can’t draw”,

“Poems written by painters and paintings made by writers”.

In conclusion, Alphonse Allais was the perfect editor-in-chief for an irreverent magazine like the Chat Noir‘s, and he became so in 1886.

Let’s go back to the cabaret and its spirit: Rodolphe Salis, owner and founder of the place, was notoriously stingy and he used to pay the artists performing at the Chat Noir just with drinks on the house. To be honest, Salis thought that, seen the great success of his cabaret, the artist should have paid him!

That gambit didn’t work with Aristide Bruant, the most popular singer of his time, who debuted right at the Chat Noir. Bruant, who knew his chickens, decided that it would have suited him better to work on his own.

His songs had charmed Paris. Aristide Bruant sang of the poor and the outcasts, raging against the squalor and the hypocrisy of the bourgeoise society. Again, here it comes the fun fact I was talking about before: it was exactly the bourgeoises who caused the sold-outs of all of his shows, getting back at his insults with roaring applause. Mah!

«For eight years I spent my nights between smoke and glasses! I screamed my song in front of a bunch of idiots who didn’t understand anything of them and who came, bored or snobbish, to be insulted at the Mirliton… I treated them like you wouldn’t treat a dog… they made me rich, I despise them: we’re even.»

When the cabaret wasn’t enough anymore to house the copious clientele (they had to turn away clients because it was always sold out!), Rodolphe Salis decided to transfer his Chat Noir in a bigger space. Bruant then bought the old place and made of it his first, very popular place, dubbing it “Mirliton”.

His shows’ playbills were made by his favorite artist – another worthy representative of Montmartre’s spirit – Henri de Toulouse Lautrec (1864-1901), and they always showed him with the notorious costume Bruant never changed (although I really hope he sometimes washed it): corduroy, black boots, red scarf, black cloak, wide-brimmed felt hat. 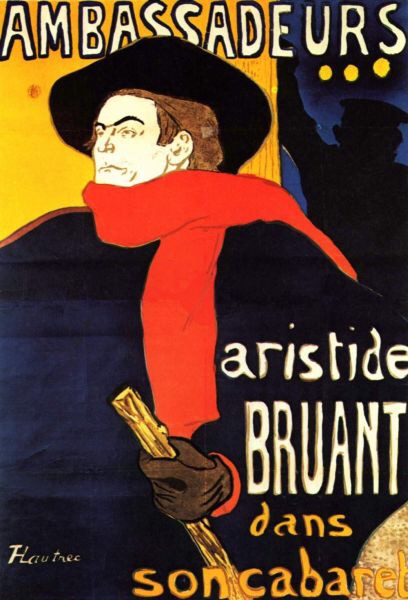 After tasting some of the tastiest “spices” of the artistic life of the times, let’s go back to the adventures of the Cabaret du Chat Noir who had just risen to a new life and a new address – 12 rue de Laval (today rue Victor-Massé).

The glorious past of this building is today reduced to a shy plaque reading:

The new location opened in 1885. The opening was a solemn procession with which the great canvas of the Parce Domine by Willette, that we already know, was moved from the first address to the new one.

The new Cabaret du Chat Noir, developing on two floors and with greatly bigger spaces, was incredibly promising because its exceptional clientele, as we have seen, didn’t just drink, discuss or kill time.
Once again, Rodolphe Salis showed how an explosion of creativity is inevitable when you force in the same room artists, writers, songwriters and much – oh, so much – wine: at 12 rue de Laval, a new wonder was about to open its doors, the famous Theatre of Shadows of the Cabaret du Chat Noir, which deserves its own article.

The Second Cabaret du Chat Noir: the rise and fall of a legend.