The special visit to the Petit Trianon, Marie-Antoinette’s private haven inside Versailles’ park, let us explore the upper floor rooms and the interior of the château (as I told you in the previous article).

At the end of the day, we had the chance to discover a discreet marvel, almost a secret one, right beside the French garden, on the west side of the Petit Trianon: the queen’s personal theatre.

The main room is a little jewel whose worth isn’t found in the materials, but in what it stands for: queen Marie-Antoinette’s passion for the scene.

The small theatre was accessible through an arbor, perfectly recreated today, on the west side of the château, on the right, looking towards the French garden.

The path was lit by oil lamps and covered with cloths to protect clothes and hairdos from being stained or caught into something along the way. 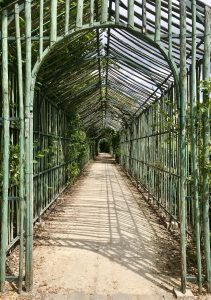 It’s barely possible to recognize the building from outside: it has no decor to show off its purpose.

This sobriety is due to a saving policy the queen herself had wanted: since she had finally managed to become the mother she had longed to be, she had stopped looking for distraction in retail therapy.

The interior, looking as luxurious as the room of the not-so-far palace, is made with simple materials, so much it gained the official monicker Théâtre de papier (‘Paper Theatre’).

Thanks to this material “poverty” – mainly papier-mâché, plaster, and wood – during the French Revolution the wonder was spared from plunder, apart from the tapestry.

At the end of the theatre’s long refurbishing period, it has been faithfully recreated thanks to workers from Lion and brought back to its original blue wanted by Marie Antoinette (in the XIX century they had been changed into red, following the fashion of the time).

The theatre company who played here, known as the “troupe des seigneurs” (‘the Lords’ company’) consisted of a group of Marie-Antoinette‘s closest friends and relatives.

The queen always played the main role, – bien sûr! – and the romantic scenes, to avoid awkwardness, were played with her brother-in-law, the lively count d’Artois.

King Louis XVI attended the performances from a central box seat right over the entrance, the other guests from smaller box seats along the walls and from the small parterre.

How did Marie-Antoinette do on stage? It’s hard to tell: certainly, her privileged friends, relatives or her loving, tender husband could never give a realistic, objective opinion.

So, we have to trust Madame Campan’s words, her faithful maid, who describes one of the piéces as «royalement mal jouée» (‘royally terribly acted’). 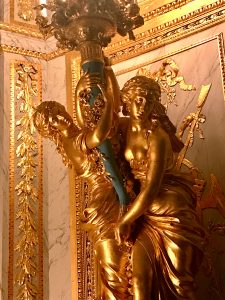 The shows were held for around five years (1780-1785) during spring and summer evenings.

After the humiliation of the Affair of the Necklace (1785) the queen no longer had the energy to have fun like the old times and left the scenes forever. 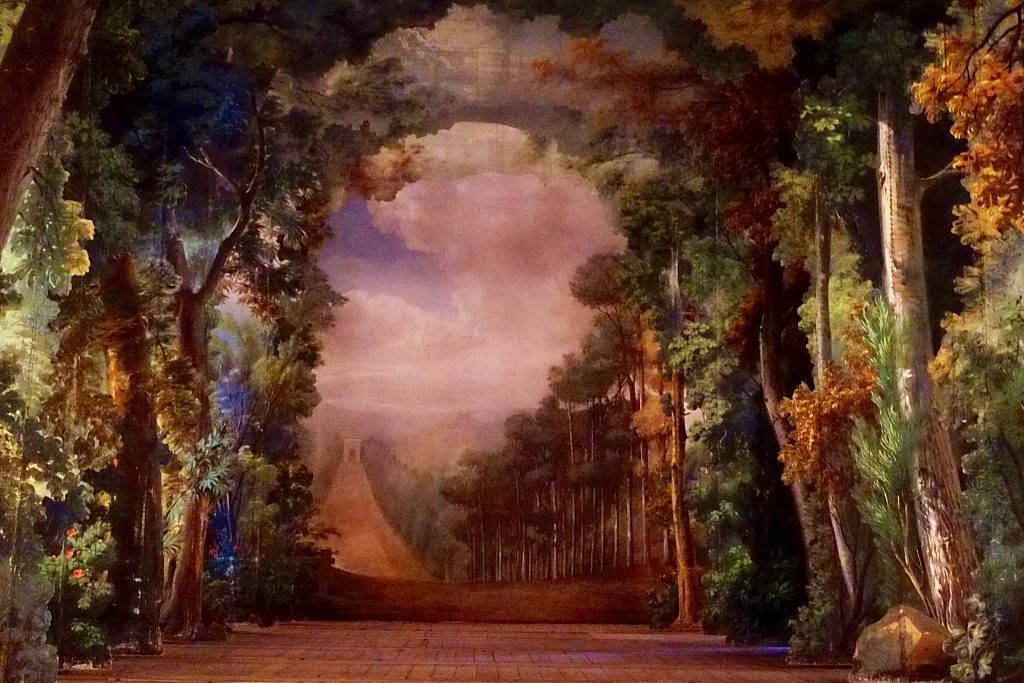 The painted backgrounds we see today date back to the XIX century when the theatre was refurbished and even had some nostalgic revival.

But the complex pieces of machinery moving the backgrounds are still the original ones from the XVIII century, and still in perfect working order thanks to the maintenance done by qualified technicians. 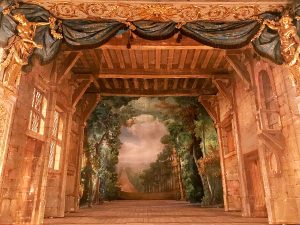 The room had a capacity of two-hundred people – but they usually were but a handful, all members of the royal family, not to generate dangerous jealousies amongst the courtiers.

Despite this precaution, the evenings at the little Théâtre de papier fueled jealousy and resentment – already pretty fired up – of the old aristocracy, regularly left out from the Petit Trianon’s gatherings.

It’s understandable that the old, painted mummies of the court weren’t the life of the party, and court etiquette was stifling. On the other hand, Marie-Antoinette’s friends were young, lively, funny and they could have the illusion of freedom, in the Trianon. 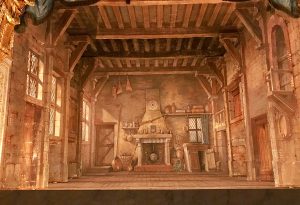 Being absent from the court for so much time was one of the queen’s terrible mistakes, creating a generational fracture inside the aristocracy.

The nobles of the most ancient families of the ream turned from powerful allies into cold opponents, and this is a partial explanation for the queen’s loneliness during the events of the Revolution.

You could access the theatre only booking a specific guided tour (in French and with a separate admission fee) directly from the Versailles website.

But now, I’ll leave you with a wonderful scene change!