In this tour, it’s possible to access parts that are usually closed to the public, and peek at the most intimate dimension of court life, and on a number of incredible artifacts.

As a first step, we explored some of the rooms at the famous Marble Court’s ground floor.

Some pieces of the collection we find in these rooms are masterpieces of craftmanship once owned to the sovereign to whom the tour is dedicated to, for example, this elegant coffre à bijoux, a piece of small furniture for jewels. Its drawer hides a little writing desk.

Marie-Antoinette got hold of this marvel when she was still dauphine, heir to the throne. It probably was a wedding gift by the then king, Louis XV.

Apart from the Grand Apartments of representation and the Petits Apartments on the first floor, from 1782 Marie-Antoinette got yet another personal apartment right here, on the ground floor, with windows opening on the Marble Court. 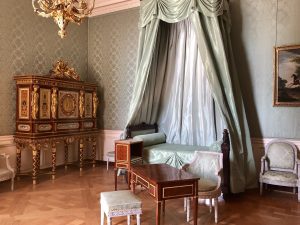 Since these rooms weren’t meant to be seen by people, the decor is plain, with no golden details.

However, an intruder immediately sticks out: the queen’s elegant serre-bijoux (on the left), dating back to 1787. This wonder has been momentarily put here until the refurbishments on the first floor will be finished. 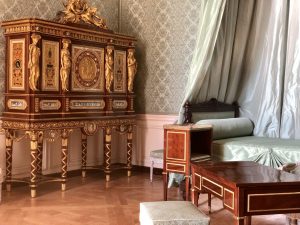 Not all jewels fit in a jewelry box.

That’s the case of the queen’s bathroom, a bijou of craftsmanship set up in 1788, one year before the Revolution, so we can infer Her Royal Highness didn’t use this for long. On the contrary, she probably never saw this finished at all. 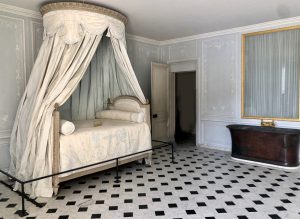 The design of this delicate decoration by – needless to say – Richard Mique, Marie-Antoinette’s favorite architect. His are most of the designs of the Petit Trianon.

The queen was a pioneer of taste, and she happily experimented with new styles. Neoclassicism was spreading like wildfire, so the figurest sculpted in the boiserie (the wood veneer on the walls) had to fully embody the fashion of the times. So, make way to swans, shells, cornucopias, and fountains, but always keep it light! 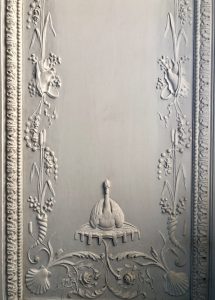 Her majesty bathed every day, something unbelievable for the time, and also advised against by the doctors.

At the same time, as it’s known, Marie-Antoinette was very modest, and that made bathing something difficult enough!

For starters, in her salle de bain there were two bathtubs: one to lather herself, the other to rinse. The queen immersed with a long flannel dress buttoned up to her neck, and the passing from one bathtub to the other had to be hidden by a linen drape.

On top of that, the water was covered in flower petals, not only for their perfume but also so the bather herself couldn’t see her own nakedness! 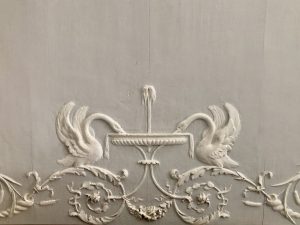 Everybody knows that, in Versailles, persona hygiene was out of fashion, but Marie-Antoinette’s example made a difference, somehow. In the eighties of the XVIII century, every member of the Royal Family had its own salle de bain, even we can’t be sure about how often they actually used them.

Behind the famous Mirror Gallery, the most crowded and congested point of the whole palace, there were, available for king Louis XVI, some small rooms for his own passions: geography, astronomy, ironworks, and woodworks. 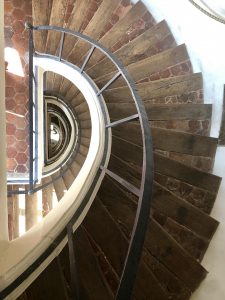 E number of small rooms or cabinets, laboratories, and libraries let us get slightly nearer to the human side of the sovereign, and his extensive number of interests.

As anticipated, there was also the salle de bain. Its access is concealed in the walls of the Council Room, a grandiose room accessible in the palace’s classical tour. 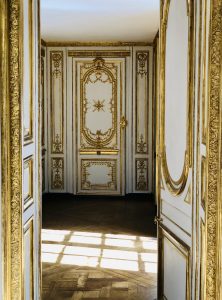 Over the same Council Room, there’s the king’s personal library, with a lot of instruments that show his passion for sciences. 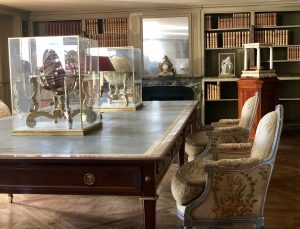 The contrast between the vastity, and the luxury, of the official rooms and these somber, modest and much more bourgeois rooms, let us approach from an human angle a much-discussed historical figure like Louis XVI. These look a lot more like the rooms of a scholar, rich of course, but far from the absolute and untouchable figure of the King! 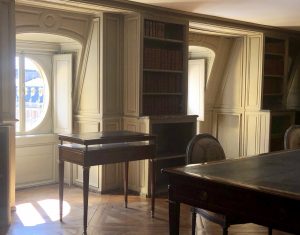 The tour, rich with stories, goes on in the heart of the period that came before Marie-Antoinette and Louis XVI, the apex of the Roccaille or Rococo style, as you prefer, whose godmothers were two women, two favorites, two icons of their times: Madame de Pompadour and Madame du Barry.

See you in the next article!

(Just a reminder that you can directly book the visit from the palace’s website, in English or French. Here’s the website!)