This article series retraces – as if it was a travelogue – the extraordinary experience of the Marie Antoinette Tour 2019.

This itinerary, an idea by Alice Mortali – president of Aimant, Italian Marie-Antoinette Association – explores monuments, places and art collections connected to queen Marie-Antoinette and the XVIII century, but not only that.

So, here’s a stimulating source of inspiration for your next journey.

The first amazing tidbit of the Marie-Antoinette Tour 2019 was the mostly unknown Musée Jacquemart-André in Paris (VIII arrondissement).

The museum is the result of the ambitious vision of a rich bourgeois couple of XIX century Paris. Let’s meet them.

Edouard André (1833-1894) was the scion of a filthy rich protestant bankers family. Nélie Jacquemart (1841-1912) had made a name for herself as a paintress. If we think that this job is difficult today, at the times – for a woman – it was utterly obscene. The Institute of Fine Arts, I remind you, will open its doors to women only in 1896!

In the beginning, their marriage (1881) hadn’t been about love, but about a common interest, as often happened at the times.

Indeed, Nélie seemed to have nothing in common with Edouard: he was a Bonapartist, she was a monarchist; he was a protestant, she was a catholic. Even so, the two shared more than met the eye.

Edouard found in Nélie the perfect partner for the creation of his project: building a luxurious abode that could be, at the same time, an art museum.

To be honest it was mostly Nélie – and not Edouard – who bartered with art merchants to buy the masterpieces to add to their legendary collection.

The situation was indecorous for the customs of the period, but they banked on the tension Nélie’s presence generated to close extremely good deals.

The Jacquemart-Andrés decided to arrange their dream museum following the Period-rooms model, so they could exhibit the art pieces by date of creation.

So they astonishingly decorated the rooms “in style” (Rococo, Reinassance, Medieval, Classic) homaging the period of the exhibited treasures. 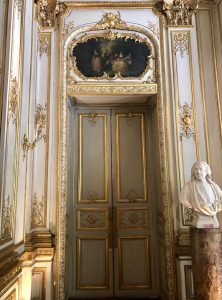 Today’s visitor crosses the threshold of the fabulous Great Salon Rococo – or Roccaille as they say in France – and it takes his breath away. However, in the XIX century, the same wonder could stir up very different reactions.

If collecting art objects from the Middle-Ages and Reinassance was common practice, the choice to exhibit masterpieces of the 1700s was considered bad taste.

The memory of the Revolution that had ended the Ancien Régime awoke embarrassment, nostalgia or brought out tempers. The XVIII century divided the French people and re-opened old wounds. It appears that Edouard André, a great lover of the XVIII century art, couldn’t be bothered with following trends.

The collection could cause controversy, but the general public agreed on one point: the sophistication of the building inaugurated in 1876, after ten years of construction, was unmatched.

The Jacquemart-André’s wonderful hôtel Particulier had a state-of-the-art architecture that dazzled the visitor in every room.

The semicircular Grand Salon was consistent with the taste of the XVIII century, while at the couple’s times, the latest fashion called for straight and chiseled lines.

One side of the room has a clever mechanism that made the walls glide and swipe sideways until they disappeared, uniting the room with the next one. This solved a lot of space problems, and great receptions were easily accommodated.

Another marvel is placed – against all customs – on the back of the building and not immediately inside the door. It’s a strange “double revolution” staircase that unites two symmetric staircases – one on the left and one on the right – in an elliptic suspended frame. A totally unexpected plot-twist! 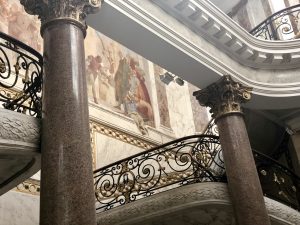 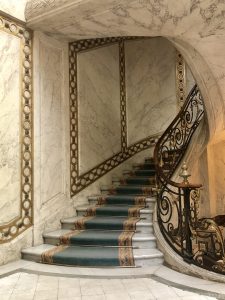 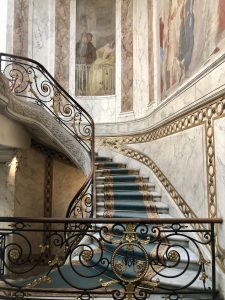 The structure defied the classical “scenographic” staircases of the times, usually formed by a single frontal stair that after split into two parts before reaching the upper floor.

To what do we owe such a virtuosity?

The designer of the double staircase, the architect Henri Parent (1819-1895), was the nemesis of the younger Charles Garnier (1825-1898), designer of the beautiful Parisian Opéra.

Inside Garnier’s majestic theatre, the staircase is perfectly classic. Parent decided to challenge Garnier with a spectacular staircase, never seen before.

With Parent’s staircase, you can access the wonders of the first floor, where we find a family story.

Edouard had an atelier set up here, so Nélie could paint after their wedding, but Madame André had absolutely no intention of getting back to her old profession. So, she decided to use the room to hosts her mostly beloved Musée Italien, the collection of Italian Reinassance.

Poor Edouard’s feelings were hurt, but the modern visitor, in retrospect, can’t but rejoice at the decision. 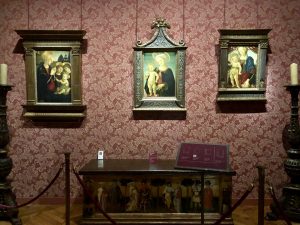 Nélie loved the Florentine painting, Edouard the Venetian. So, they created a unique collection of Italian masterpieces of the XV century, focused on the so-called “primitive” art, that had only recently rediscovered (Mantegna, Baldovinetti, Luca Della Robbia…).

But the Jacquemart-Andrés’ love for art spanned for the whole Europe: in the rest of the museum there are masterpieces from English, Flemish and Dutch art.

Have a swell exploration, and I’ll be waiting for you at the next step: a Versailles’ palace almost nobody knows – even “private”!