From the legends and strange stories that the famous hill of Montmartre tells, someone could think that some kind of genius and madness-inducing substance had, at some point, infected its soil.

Between the little, nostalgic old alleys were mills and animals were the main characters, you can trace some bizarre events – some rather grim – that made the history of the “maddest” hill of Paris, from its origin itself. 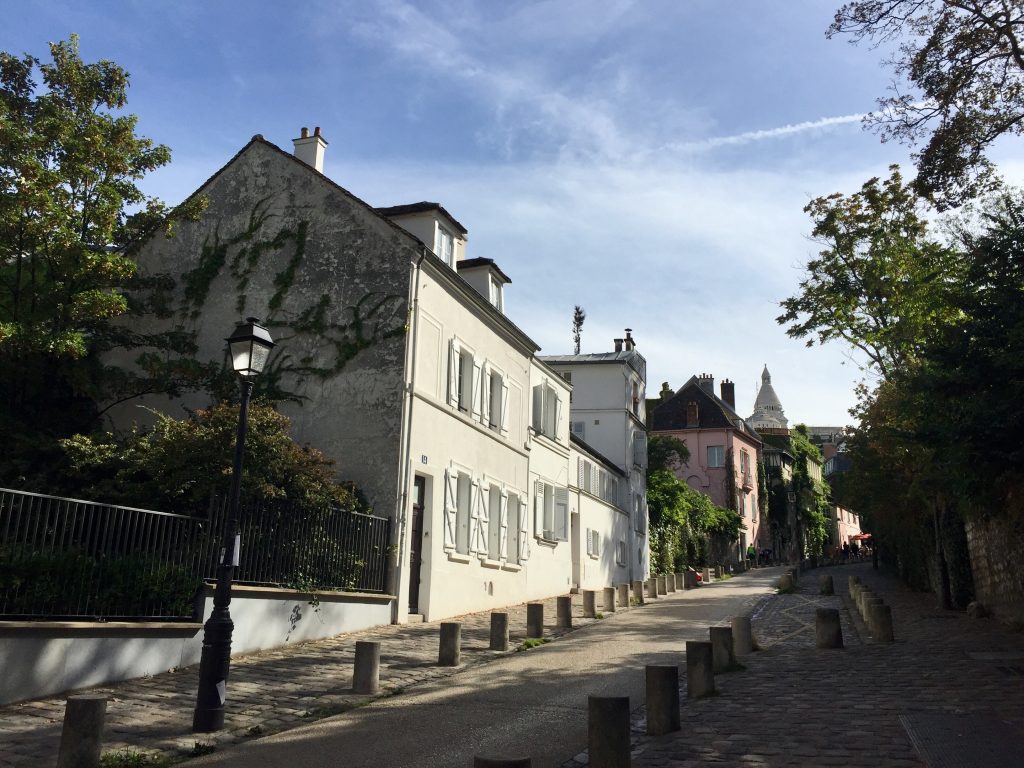 Its name, “Montmartre” it’s an enigma itself.

One of the most famous theories suggests that the name dates back to the ancient temple of Mars, built on the top of the hill by the Romans (from mons Martis).

Another theory, instead, guesses that the name is the contraction of “mont-des-Martyrs” (“hill of the martyrs”). It would stem from the grim story of a man, or rather three, that “lost their heads” on the hill, starting a tradition that would have gone on for centuries, even if only figuratively. They were the most revered Saint-Denis and two of his companions: Éleuthère e Rustique, who was beheaded right here for not renouncing the evangelization of the roman Gaul, after being warned many times.

Christian forewarned is forearmed, if he’s not up for holiness, and here’s the plot twist: once beheaded, the legend goes, Saint-Denis took his head under his arm, politely greeted everyone and marched away, followed by an angelic choir, that didn’t leave him, even when, along the way, he stopped to wash his macabre souvenir in one of the hill’s springs, on the far side of what today is called impasse Giradon.

The fountain became, of course, miraculous – cela-va-sans-dire! –and from time to time the villagers claimed they still heard a strange singing near it. Not a surprise: to have the right to live on Montmartre, as you will see, hearing voices was one of the basic requirements.
The spring doesn’t exist anymore, today. It has been swallowed by the gypsum quarries that turned la Butte into a rightful honeycomb, but of course, there’s a commemorative statue.

Not far from here there’s a corner that, once upon a time, would have dragged anyone in a surreal atmosphere, sane or not. During the hard Paris winters, the water of drinking through, in the open air, emanated steam clouds, enveloping the ancient country houses of some nobles.

In some grey, empty, wonderful winter mornings, I managed to imagine how could have Montmartre appeared in times of madness: wind and mills, hovels and animals, some deserted villa and silence. Only the names of the streets keep the secret of the steam: rue des Brouillards, “Fog Street”; near it, there’s a folie, a country house, with the same name: Château des brouillards; and, finally, rue de l’Abreuvoir, ‘drinking through street’.

If the memory of this enchanting corner got to us, is mainly thanks to the description from a writer who lived for almost ten years at the Château de Brouillards I mentioned before, an XVII century villa, just feet from the foggy water.

«What seduced me most in all of this space sheltered by the tall trees of the château des Brouillards (‘castle of fog’) were the remains of the vineyard tied to the memory of Saint-Denis who, from a philosophical point of view, was a second Bacchus (Denis, in fact, comes from the greek Dionysos, the God of wine, called Bacchus by the Romans)… and then came the coming and going from the drinking through that, in the evening, takes life with the show of horses and dogs taking advantage of its waters… admirable place of rest, silent at those times…».

To be honest, that wasn’t the only hill residence of Gérard de Nerval, brilliant poet whose ramblings gave him the right to be a favorite son of the butte. Nerval is today celebrated as a genius but, precisely feet from here was cured for madness in the famous clinic of Doctor Blanche, of which I speak in this article.

Between the patients of the legendary clinic, some stand out more than others:

Poor Gérard was a fol délicieux – a “delicious madman”, so they called him – known in the cultural environment of his times for his excellent translation of Goethe’s Faust. With his usual depressive state, he could have maybe chosen something less “plumbeous”!

Appreciated by writers like Charles Baudelaire and Alexandre Dumas, Gérard de Nerval was a member of the exclusive “cenacle of the romantics”, who gathered at Victor Hugo’s house.
Truth be told, the troubled poet couldn’t have been an easy company to keep: he was gentle, but always sad and introverted, and as soon as he got some money in his pockets he disappeared for months, lost in travels and wandering, that could be endless until the money dried up (they say once he came back to Paris from Germany through Switzerland… on foot!).
Once he was seen walking through the gardens of Palais-Royal with a living lobster on a leash. He didn’t seem to find it funny, at all:

«Why should a lobster be more ridicolous than a dog, a cat, or any other animal that we bring with us? I like lobsters, they are calm, serious, they know the secrets of the sea and they don’t bark…».

Extraordinary poet of dreams and imaginary, Gérard de Nerval suffered from hallucinations and through writing, he tried to give them a sense, an epiphany.
Not even a month after he published those lines about the fog in rue de l’Abrevoir, and mere days after taking the photograph you’ve seen, Gérard de Nerval was found hanging from a grate in rue de la Vieille-Lanterne – «The filthiest place he could find», according to Baudelaire. It will take 70 years for his writings to find their place in the French literature. Before that, it was all a Gérard who?!

But the snake of madness slithers through the alleys of the Butte until it brings me to the corner of sane madness that I love most. A little house that smells of country, an old tree twisted by time, on the wall, a merry drawing: a rabbit. And so I proceed: as an Alice, I have a duty to follow the rabbit…

(To learn the mad stories that the little house hides, read the next article: The Lapin Agile: the cabaret of assassins and the horrible crime of Pantin) 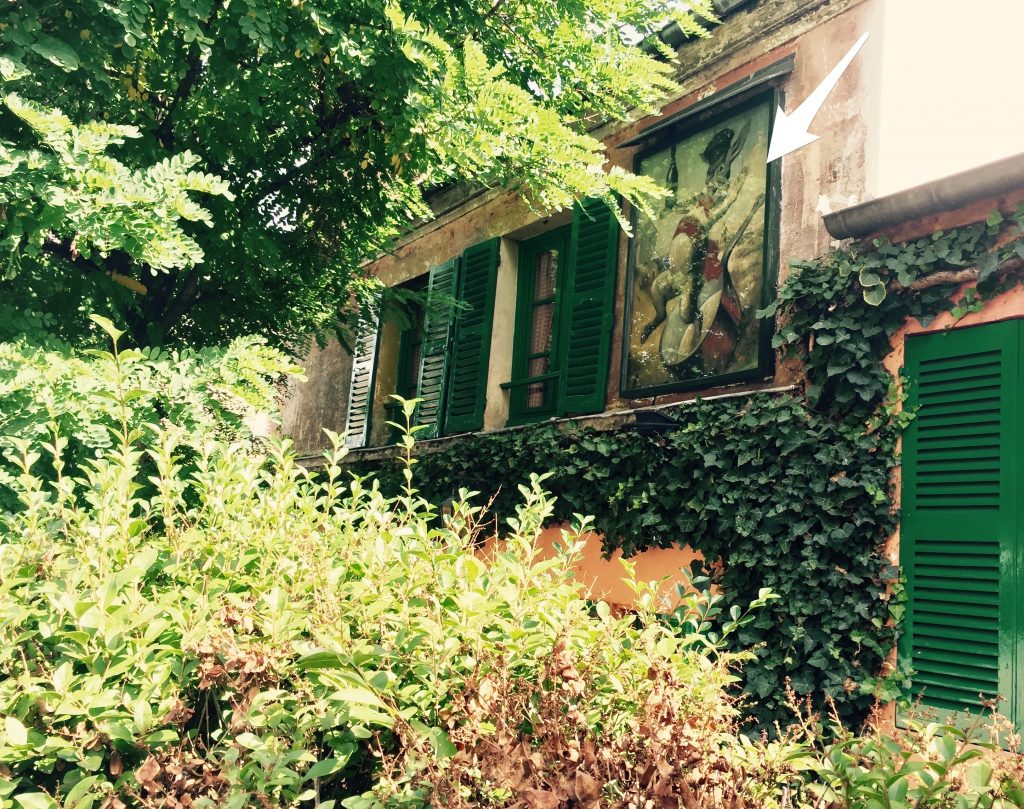 All articles in the Series
Next post →
Related articles